Yesterday I lost a piece of my heart.

Emma came into my life almost 17 years ago as a shelter rescue. It was an 11th hour situation, she was slated to be destroyed and Indigo Rescue pulled her (and several others) out to waiting volunteers as foster homes.

Our orignal plan was to foster and then find a home for her. But she crawled inside my heart and built a nest and I couldn’t let go.

The vet believed she was only about one, but had already had puppies. She was rail thin and still had signs of nursing.

She was very timid at first and we suspected that she had never experienced the outside world. Every sound was new and frightening. Common objects were strange and potentially dangerous.

We also discovered that she had very strong maternal instincts. She was attentive to both the sounds of crying babies and mewling kittens.

Mostly, though, she read me like a book. She knew when I was upset or sad and would come insist on hugs and kisses. She would also let me know if I had worked too late and it was time for bed.

In the end time was the enemy. She became increasingly arthritic and had cognitive issues. As difficult as it was to make the decision and as much as it hurts, I believe it was right.

I don’t have words to express my feelings right now. Our home feels very empty. 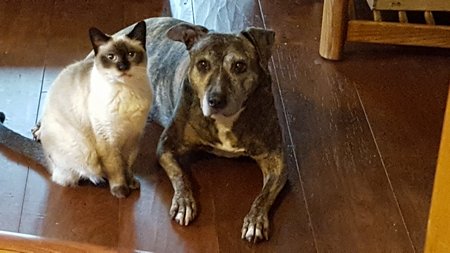