About 3 weeks ago, I tried to share a cup of coffee with my laptop. It wasn’t happy.

We have a bunch of coffee mugs from a set of dishes made by Pfaltzgraff. They are probably close to 10 years old now and the handles keep breaking off. Literally, the handle detaches from the mug. The set started with 8 mugs and I’ve superglued 4 of them back on now.

So, 3 weeks ago, I sat down at my desk with a cup of coffee, opened up my laptop, lifted the mug to take a drink and about 6 inches above the desk the handle detached and the mug dropped back to the desk. I was poised with only the handle in my hand as coffee flooded the keyboard (Murphy’s law).

As I had not yet turned the machine on and since it had been asleep for at least 8 hours, I hoped that the damage would be minimal. So I unplugged the laptop, mopped up the mess, flipped it over and removed the battery.

I cleaned the top of the keyboard as thoroughly as I could then removed screws and opened up the case. Once inside, I assessed the intrusion and blotted at all of the obvious wet areas. There were surprisingly few, the liquid didn’t penetrate much past the keyboard.

After a couple of days of drying, I reassembled the laptop and powered it up. It booted to the BIOS screen, but wouldn’t boot Windows. So I shut it back down and took it to a repair shop for them to troubleshoot.

It took them a week to get around to working on it and they called and told me that the damage was limited to the keyboard. So a new one was ordered and 2 days and $104 later, I had it back on my desk.

I booted it and noticed immediately that there were configuration differences. My desktop had changed and there were other changes that I had made that had reverted. Annoying, but nothing that couldn’t be adjusted.

But when I tried to plug in my external monitor, it wouldn’t work. Actually, if I plugged it in to the HDMI port, the laptop would hang. If I plugged it into the VGA port, it wasn’t even recognized. Also, the USB ports on the same side of the machine as the HDMI and VGA connectors were no longer working.

As a developer, I depend on that machine. It’s also my primary interface to all things internet. While it was in the shop, I tried to use other devices for email, web browsing, creating/editing documents, etc. They were awkward. So, consequently I put off doing most things until I got it back.

As it’s about 3 years old and was a budget machine to start with, it wasn’t worth putting more money into it to try and fix it. So I decided to start shopping for a replacement.

My first stop turned out to be my last. I headed over to Best Buy and wandered around their display, pounding on keyboards, creating simple documents and watching videos. The two things most important to me are a good keyboard and a good display. I’ll happily give up some performance as a compromise. I literally spend hours and hours every day typing and looking at a screen. If either the keyboard or screen is poor, I will pay the price in fatigue and frustration.

There were a number of machines, but I narrowed it down to a couple that seemed to fit the bill. I left with the plan to go to a couple of other stores and see what they had to offer.

One key point: As I have a Best Buy credit card, I can get 12 month no interest financing. This is a compelling point.

I went home and looked up reviews and specs on the machines I had favored. A couple of days later, I went back to the same Best Buy and asked about clearance and open box items. The sales rep opened up the cage and started looking through the boxes and pulled out the exact model that I had chosen. But reduced considerably because it was an open box and missing a few (trivial) things.

I asked if I could use my financing on the open box and he said that I could. Done! I handed him my credit card and took home a shiny new HP ENVY x360 – 15m-dr0012dx. 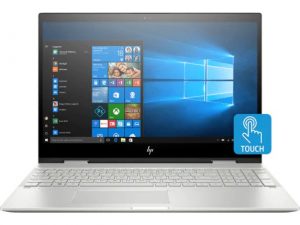 I planned to use PCMover to migrate all of my applications and data from my old laptop. I’ve used it several times already and recommend it. And, while I abhor their licensing, I’ve had great success with it.

Due to time commitments, it was actually a couple of days later that I was finally able to turn the machine on and try it out.

This is when I discovered why it likely had been returned.

The laptop comes configured with Optane memory (a small, fast SSD) and a 512 GB SSD. But, for reasons I cannot comprehend, the Optane is configured as the primary drive and the SSD as the secondary. The Optane is 40 GB and is the boot device and has the OS installation and user directories. It also has temp, documents and downloads. And it was almost completely full. Right out of the box, there was less than 1 GB of space left on the primary drive. No room for applications, no room for updates, no room for browser temporary files.

What is the use case for this? It’s essentially a very expensive Chromebook.

So, I first contacted HP support to find out if: 1) this was the way it is supposed to be configured and 2) how to change it.

So I pulled out my disk cloning application and a spare drive and copied the bootable Optane to the 512 GB SSD. Then I reconfigured the BIOS to boot to the SSD. This sounds simple, but it actually took several days, some research and a couple of failed attempts to get it right.

I now boot to the SSD and the Optane is the D drive (which is still full). At some point I may investigate putting the system files on the Optane and linking from the SSD. It isn’t urgent, so until I run out of space on the SSD and it becomes more critical, it’s going to be on the back burner.

A few more days, a session with PCMover, a few updates to applications that didn’t transfer and the new laptop is up and running. I can now comfortably decommission the old one.

I will keep its drive and resell the memory to buy more for the new machine.

I am quite liking the new laptop. The keyboard and display are both good. It’s a smaller form factor, the performance is good and the battery life is excellent.

Just hoping to keep the coffee away from it at least until I’ve paid for it.